We were thrilled and honored to participate recently in the Fiesta Latina artisan expo, sponsored by Western New Mexico University. It was a pleasure to get to meet many people from the region, and to help visitors to our booth pick out their favorite Mazatec embroideries from the talented women of San Miguel Soyaltepec, Oaxaca. As the artisans were unable to travel to New Mexico to attend the Fiesta, we wanted to share some information about them and where they live. 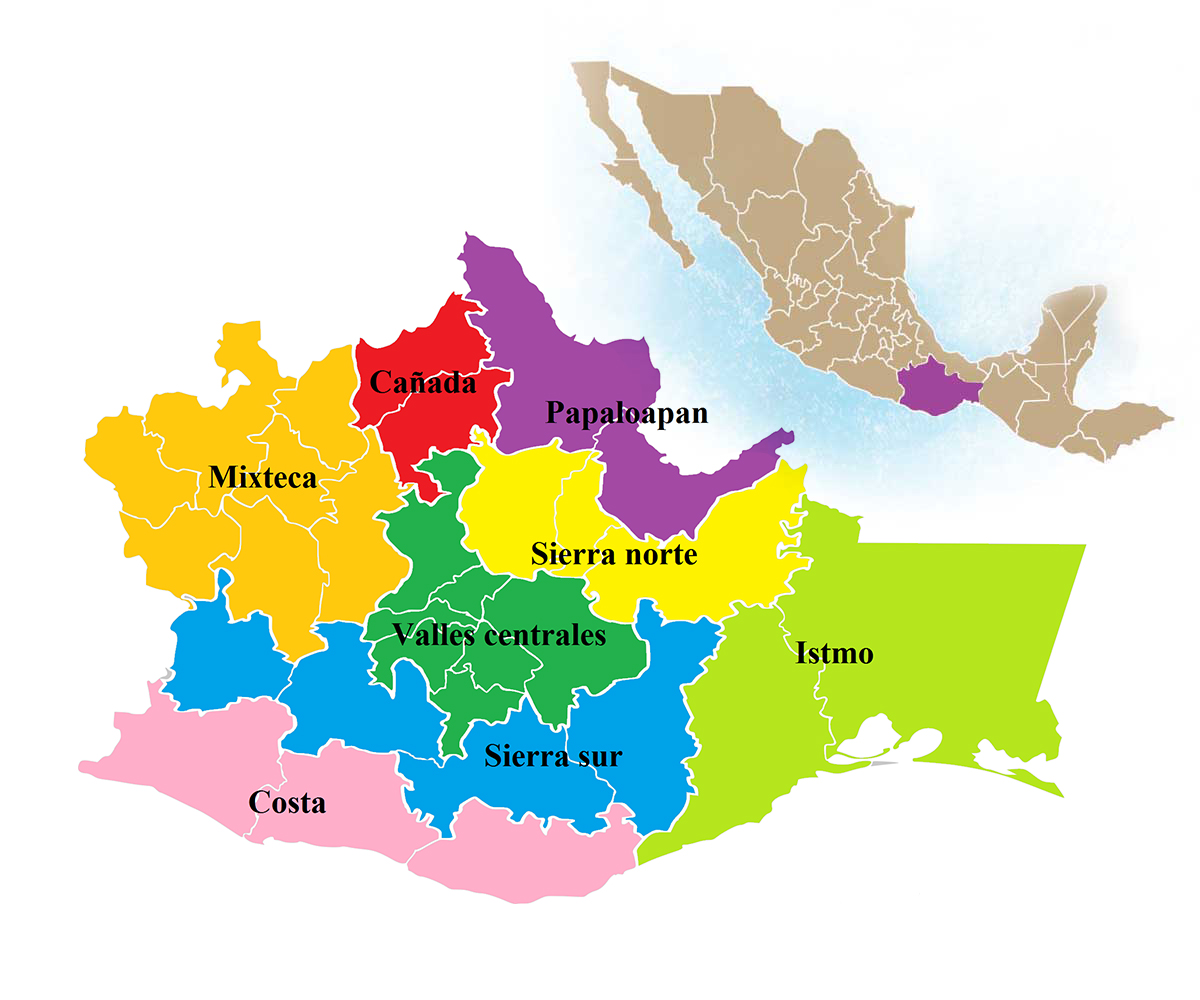 The Mazatec People and Region

One of over 60 ethnic groups of Mexico, the Mazatec live in a remote region of northern Oaxaca,  closer to Veracruz than to Oaxaca’s Central Valleys (see purple region), and are neighbored by the Chinantec, Cuicatec and Mixtec people. These original people, believed to be descendants of the Olmec, live in a landscape surrounded by hills, rivers, tropical rainforest, and today, a dam. The Presa Miguel Aleman (named after the president at the time), was created in the 1950’s for hydroelectric power. Like any dam, it destroyed the natural and cultural environment, displacing many of the Mazatec people, who were relocated to the edge of the dam, in Veracruz. A small percentage stayed, moving to higher ground. Upon seeing the region, like Lake Powel, it looks like a beautiful lake. But beneath lies the remains of the lands of these native people of Mesoamerica. Some of the elderly of the community remember this traumatic displacement that occurred in 1950’s, displacing over 22,000 indigenous Mazatec people. 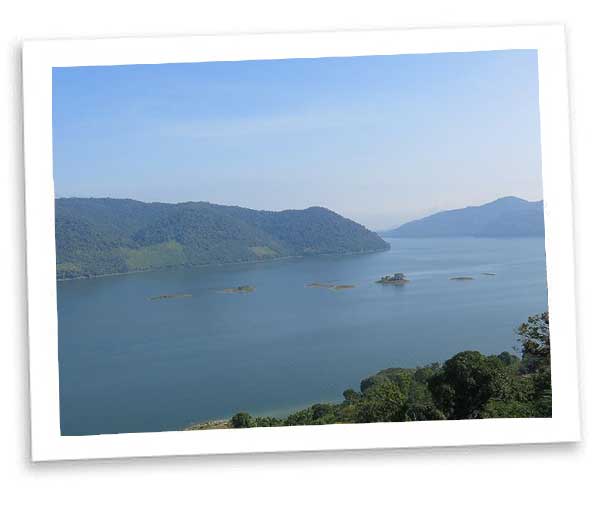 The women of San Miguel Soyaltepec, now called “Viejo” San Miguel Soyaltepec are the ones who stayed, moving to higher ground. Again, the majority were relocated to nearby Veracruz, to what became “Nuevo” San Miguel Soyaltepec or Temascal, today, the Municipal Seat.  In moving, many lost their culture and dress, as they were closer to urban centers, such Tierra Blanca, and became culturally absorbed into this new, more urban lifestyle. The small population of families that did stay on their original lands, moving to higher ground, are the women of “Viejo” San Miguel Soyaltepec. They are the ones who are most dedicated to preserving their ancestral Mazatec ways; language, dress, traditions and lifestyle. For those who have purchased  huipiles at Fiesta Latina or on one of our journeys, you now have a piece of Mazatec cultural heritage, preserved by their “cultural resistance” in choosing to stay on their original land, their homeland. 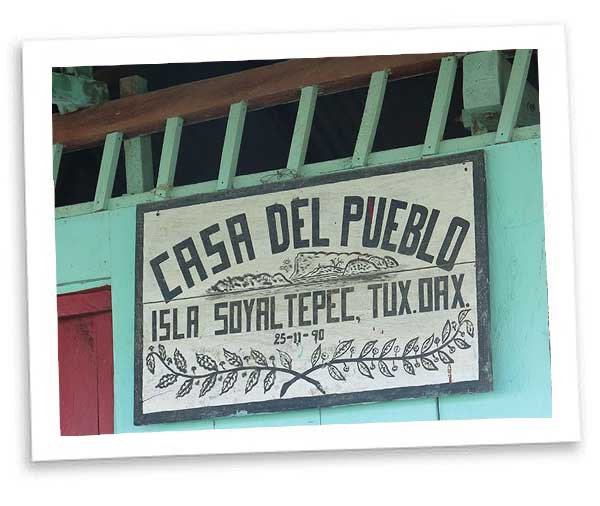 Within the Mazatec region,  is the Mazateca Alta (highlands), located within the Sierra Madre Occidental chain, and the Mazateca Baja (lowlands), the lower altitude regions characterized by low lying, hilly plains. Today, the Mazateca Baja region is called “Mil Islas”, Thousand Islands, as these hills are now surrounded by water and look like islands. Notable communities in the Mazateca Alta are San Bartolome de Ayautla, known for their beautiful, dense and richly embroidered huipiles, and Huautla de Jimenez, made famous by the Mazatec “curandera”, spiritual healer and guide, Maria Sabina. Maria Sabina is legendary and was adopted by international pop-culture, similar to Carlos Castaneda, known for her knowledge as a “curandera” and use of hallucinogenic mushrooms from the region.

San Miguel Soyaltepec, along with San Pedro Ixcatlan, Jalapa de Diaz, among others, are communities of the Mazateca Baja. The women’s dress of the Mazatec is characterized by densely embroidered huipiles (tunics). While they would have originally been hand woven on a backstrap loom, with hand-spun cotton (as in all of Mesoamerica),  now commercial fabrics and threads are used. Today, the women use commercial “manta” or cotton muslin as the base cloth (or canvas!) for their beautiful embroideries of birds and flowers. 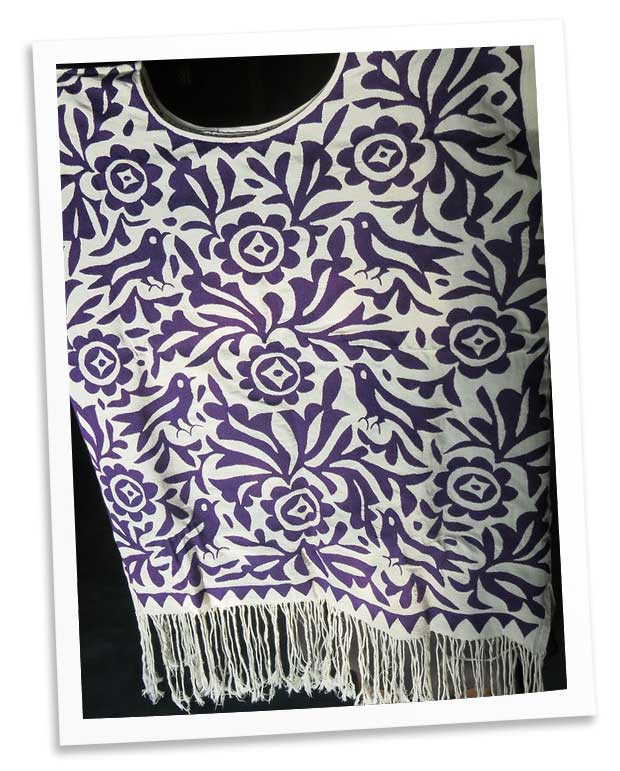 Why birds and flowers? In a book with this name, “Porque pajaros y flores”, by Romeo Sarmiento Castillo, he writes, “Why flowers? The answer is simple: because in this region, historically and today, this landscape is characterized by abundant wildflowers, in many shapes and colors, that bloom at varying times of the year.” He goes on to name some of the birds of this region, a diverse landscape of tropical rainforest, mountains, low lying undulating plains. In Spanish, he names: “el tordo, la urraca, las tortolitas, los colibries o chuparrosas, la Paloma torcaza, la uninia y chischis”. Summarizing, he says, the birds and flowers on the Mazatec dress are inspired precisely in the local flora and fauna.” The imagery is representative and descriptive, and not symbolic or laden with meaning. One interesting aspect he gleaned from conversations with the Mazatec women was, “some of the women said that when they die and are buried, wearing their huipil, the birds will help them on their flight; their journey to reach the “cielos”, the heavens.

As in many communities in Mexico, there is daily wear (diario), dressier wear (media gala), and festival, ritual wear (gala). Later additions were made to embellish the huipiles with commercial laces and ribbons. 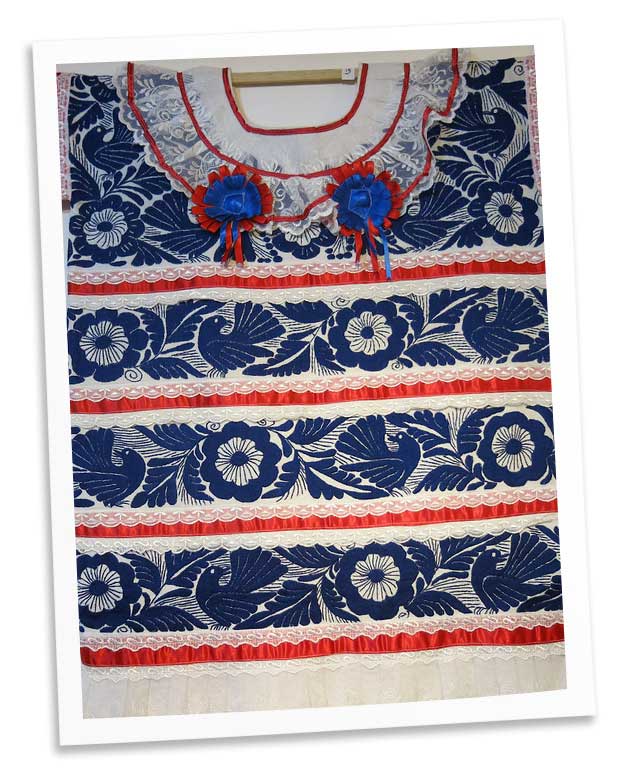 Today, fewer and fewer women are seen wearing the diario, daily wear, and many have opted for Western clothing. However, on special occasions, fiestas and rituals, the women will don their finest huipiles. Much of the preservation of the embroidery motifs and techniques come from the fact that their is a market for these huipiles, outside the community. Many of the women derive their income by selling huipiles, particularly during the July Guelaguetza festivities in Oaxaca City.

The women of San Miguel Soyaltepec are very isolated, as it requires a “lancha” boat to get on and off the island. This isolation, coupled with the bitter collective memory of the flooding and destruction of their Mazatec land and homes, makes these women, in particular, very insular and cautious with outsiders. We have been visiting these women for several years now, and we are just beginning to know them better, and integrate into their lives and families.

Join us on a journey to San Miguel Soyaltepec in February!

We invite you on our next journey to the region, to join Tia Stephanie Tours and the Embroiderers’ Guild of America, as we embark on a journey into the Mazatec and Chinantec region of Oaxaca. 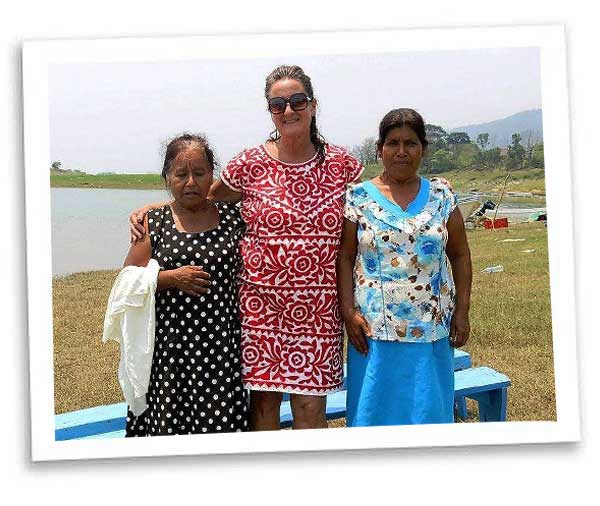 « Help the Artisans, Help the Isthmus of Tehuantepec
Piteado: The Art of the Charro »