Pronounced “MO-lay” the word comes from the Nahuatl (Aztec language) word “mulli“, which means, sauce, mixture, stew, or concoction. In its pre-Hispanic form, this stew was made of dried chiles, tomatoes, seeds, and chocolate.This dish pleased the royal courts, and continues to delight today.

Each mole is as unique as the family who makes it, and the king of all moles is the complex black mole, made from over 30 ingredients. The chiles alone include; guajillos, pasillas, anchos, and chipotles. Other ingredients include: peanuts, cinnamon, raisins, plantains, chocolate and various herbs. Making mole is an all day endeavor, so be sure you have plenty of time on your hands. Of course, like all modern and busy cooks today, one can find high quality, prepared mole pastes that require reconstituting with stock, tomatoes, more chocolate and sometimes even peanut butter!

email
What is Day of the Dead?

The Mexican tradition of Day of the Dead has its roots in Pre-Hispanic beliefs combined with Catholic ritual. The concept of Death has a central place in the lives of indigenous people in Mexico. Death, however, is not feared, as it is not viewed as final, but as an integral part of the cycle between life and death. The tradition of Day of the Dead remains one of the most celebrated in Mexico, particularly in the regions of Oaxaca, Michoacan, Chiapas and Yucatan.

Home altars are erected in homage to family members who have passed on. They are decorated with photographs of the loved one, and objects representing things they enjoyed during their lifetimes. Common to many altars are representations of earth, wind, fire and water. Earth is represented by flowers, usually marigolds or cempazuchil, wind is represented by papel picado, or cut out tissue paper; fire by candles. A path of marigolds is often spread from the entry of the home to the altar, to help lead the spirit. Gravesites are cleaned and decorated, with flowers and candles. Food and drink are placed at the gravesite, as it is believed that the journey from the underground, Mictlan, is arduous and the spirits need nourishment upon their arrival. Tamales, mole, atole, coffee, tequila and pan de muertos are prepared. Day of the Dead is a time of remembrance. To forget, is to let our loved ones die. By commemorating our loved ones, we celebrate our own lives. 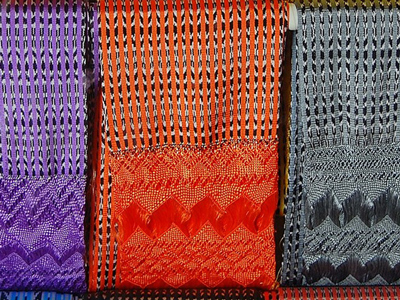 The rebozo is historically and presently a universal garment in women’s Mexican dress, worn by many social classes in Mexico. This ubiquitous garment has been identified as a syncretic garment, that fuses indigenous elements of the prehispanic tilmatli (cloak/cape) and the Spanish “mantilla” or shall with origins in the Orient, that came to Mexico via the Manila Galleons that hauled/plied trade between Manila and Acapulco. The addition of fringe to the basic garment shape (cape) is believed to be one of the primary embellishments from this outside influence. The ikat, dye resist traditions are believed to have entered Mesoamerica via the Andean cultures of South America.

Numerous indicators in metallurgy, architecture and other reference points indicate that a South / North trade and influence was present in prehispanic Mesoamerica. This theory points to the fact that ikat technique and dress/clothing types were not just influenced from Asia and Europe, but in addition from South America. Further to this discussion is the point that it is highly unlikely that such a complex technique as ikat could have easily been adopted in Mesoamerica if SOME knowledge of this technique did not already exist. Therefore, the theory states that this technique had to be indigenous to the region in some capacity, in order for it to have been adopted/adapted in the manner in which it was. According to Virginia Davis, “It is important to note that the design of the ikat patterning of the Mexican rebozo has very special properties.

The resist patterning is created by vertically in a warp-faced textile, but after dyeing, the motifs read horizontally in the finished weaving.” While historically there have been numerous rebozo manufacturing centers in Mexico, such as in Oaxaca, Guerrero, Puebla and other regions; today, the primary rebozo manufacturing regions in Mexico are: Santa Maria del Rio, that specializes in silk ikat rebozos; in La Piedad, Michoacan, specializing in “artisela” or artificial silk ikat rebozos. In the Purepecha Plateau of Michoacan, the rebozo worn by almost every woman of the region. Here, the rebozo is not “jaspeado” or ikat dye resisted, but is made traditionally on backstrap looms, with gorgeous stripes and colors. In Moroleon, Guanajuato, they produce high volume (treadle loom) ikat cotton rebozos that are distributed throughout Mexico. Finally, the mecca of rebozo design and production in Mexico is in Tenancingo, State of Mexico, where the ikat traditions, both traditional and innovative are produced with cotton versus the silk in Santa Maria del Rio. It has been mentioned to me that the Mexican upper social classes prefer to don the silk rebozo from Santa Maria del Rio. However, in my opinion, it is the ikat dyers of Tenancingo who deserve our attention and respect. In fact, they helped resurrect the ikat traditions in Santa Maria del Rio in the 1950’s, and they continue to develop their craft in spite of the fact that most upper class Mexican women today prefer the silk rebozo. The First Lady of Mexico is often seen in silk rebozos from Santa Maria del Rio, yet she has not (to my knowledge) embraced the rich traditions of the cotton/ikat rebozo from Tenancingo.

The Mexican painter, Frida Kahlo, (1907-1954) exhibited in private galleries during her lifetime, was rediscovered in Europe in the 1980’s, and has grown to cult status ever since. Madonna began collecting her art and Selma Hayek, starred in and produced a movie about her life.

Why the fascination with Frida, or as some call it Fridamania? Her artwork was deeply personal, she embraced Mexico’s indigenous roots as expressed in her colorful clothing, she held the fascination of most men who met her including, Diego Rivera, Andre Breton, Leon Trotsky, Isamu Noguchi, she loved a good party, had the mouth of a sailor, and worked tirelessly on behalf of social and political reform in Mexico. Frida’s complex life, thought and art reflected the dualism that pervades Mexican consciousness, with deep roots in pre-Hispanic cosmology.

According to Biographer, Hayden Herrera, Frida would have been gratified by the multifarious memories she left behind. She was, in fact, one of the creators of her own legendary stature, and because she was so complex and so intricately self aware, her myth is full of tangents, ambiguities and contradictions.

Monarchs east of the Rockies migrate each year to the Transvolcanic mountains of central Mexico. Millions and millions of butterflies fly south. In 1975 the scientific community finally tracked down the wintering sites of the Monarch in Mexico. Until then, the Monarch butterflies’ winter hideouts had been a secret known only to local villagers and landowners.

The sites the Monarchs use during the winter have particular characteristics that enable their survival. Trees on which to cluster are one of the most important elements of the sites. Nearby trees, streams, underbrush, and fog or clouds all form an intricate natural ecosystem that is the monarchs’ winter habitat. These conditions are found in oyamel fir forests, which occur in a very small area of mountain tops in central Mexico. The surrounding trees serve as a buffer to the winds and snow. They cluster together, covering whole tree trunks and branches, and cling to fir and pine needles. The tall trees make a thick canopy over their heads. Protective trees and bushes soften the wind and shield the butterflies from the occasional snow, rain, or hail.

Are these trips for me?

email
How large are your groups?

We offer small group tours ranging from 8-12 travelers, as we wish to offer an intimate experience, and one that is not disruptive to small community settings. Custom group tours and private tours are available too!

email
What degree of difficulty do your trips expect?

As our trips are focused on culture vs. adventure travel, we offer excellent point-to-point transportation to locations visited. While some walking is inevitable, including on uneven terrain, our primary objective is to learn about people and their traditions. Rigorous hiking is not a criteria!

email
Can you tell us about accommodations?

Yes! As in everything we do, we strive to provide unique experiences, including where we call home. Our lodgings consist of quaint B&B’s with warm and hospitable hosts, unique lodges in archeological zones and historic buildings and convents. We tailor our accommodations to the environment we are in.

email
How are your trips unique?

We take you to the less traveled, less known, but culturally rich regions of Mexico. In addition to being culturally and linguistically fluent in the “language of Mexico“, we have special local partners who share the same vision of wishing to introduce travelers to the rich and complex country, they call home, Mexico!

email
Do you offer custom trips?

Yes. If you would like a customized itinerary, or if you have a group and would like an educational travel program designed for your needs and travel dates, we are happy to work with you.

email
How long have you been in business?

Stephanie Schneiderman has been in the travel business for more than two decades. Stephanie has traveled extensively throughout Mexico and, given her cultural and language fluency, has gained access to many off the path locations and communities.

However, if you can’t find what you’re looking for in this list of Frequently Asked Questions, please contact us at info@tiastephanietours.com
or call at (734) 769-7839

Do I need a passport?

email
Is a deposit required?

Yes, $500 will secure your spot on a trip! Please read our Terms and Conditions in that section, thank you!